In 2007, Marco Frisina succeeded in the titanic enterprise of bringing Dante Alighieri’s masterpiece La Divina Commedia to the musical stage to make him the protagonist in the fascinating journey of Dante through the 3 kingdoms. It was a show in which the poet's verses are flanked by acrobatic dance, music and 3-D projections. Describing the work, Frisina says it is "a spiritual journey of man, from the darkness of evil and of perdition to redemption in the divine light through a journey made of personal travails and mystical asceticism." Since its debut, La Divina Commedia has been seen by more than 450,000 spectators of all ages.

Beginning in January 2018, a new production has returned to the stage, in 4 major cities in Italy, with profound and engaging restyling and innovations. "The main one," says Frisina, "is that there are many more verses recited, and the actor Giancarlo Giannini is the voice of Dante Alighieri accompanying the whole show so that the theme of the trip is even more evident." In addition, 2 new songs have been added, such as the one that presents Cato thus allowing him to face the social passion of Dante, an aspect that was lacking in the original production. Enemy of Caesar and defender of political liberty, to the point of sacrificing his life, Cato is the custodian of Purgatory.

"Dante's life is spent searching for the meaning of human existence and freedom, which is not," underlines the composer, "to do what one wants, but to work for the good."

Below is an orchestral arrangement created and conducted by Marco Frisina for performance by the Plainfield Symphony Orchestra in 2014. 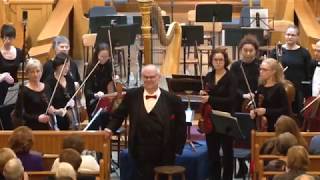 Respite from a cold January afternoon